The whiff of revolution in Spen Valley was in the air twice in the 19th century; first with the luddites and then the chartists.

England had been in conflict with France on and off since the French revolution of 1789. War with America brought a collapse in trade in 1811. Unemployment could mean starvation and even death. Tension mounted.

Certain textile manufacturers had installed mechanical shearing frames, used in finishing woollen fabrics. These threatened the livelihoods of croppers, skilled men who hand-sheared the cloth. The frames became a rallying point for protest.

William Cartwright introduced frames at Rawfolds mill, Littletown. Croppers and others angered by the poverty around them plotted upstairs at the Shears Inn, Hightown. It was illegal to belong to any sort of combination (union), and breaking machinery was a hanging offence. So they swore an oath of secrecy.

In February 1812, on a snowy Hartshead Moor, four men attacked two wagons carrying more frames to Rawfolds. The wagoners were tied up and the frames smashed to smithereens.

George Mellor of Huddersfield, leader of the local Luddites, took the decision to attack Cartwright’s mill. A throng of 300 to 400 men marched from the Dumb Steeple monument near the Three Nuns on the night of April 11th to 12th, armed with huge hammers and axes. As the mill was attacked, soldiers on guard fired shots, and men fell, bleeding. The assault was repulsed and the attackers fled.

Two mortally wounded men were taken to the Star Inn at Roberttown where, legend has it, they were tortured using aqua fortis (nitric acid) to reveal the names of their co-conspirators. In his death throes John Booth (19) asked his interrogator “Can thi’ keep a secret?” Roberson, the local vicar, leaned forward and said he could, whereupon Booth replied “So can I” and promptly died.

Two weeks later a mill owner, William Horsfall, was shot and killed by Mellor and his accomplices. This marked the beginning of the end for Luddism. Arrests followed. After a mass trial in January in York, 13 men including Mellor were hanged, and others transported to Australia.

The great Reform Act of 1832 shifted power from aristocrats towards the middle-classes, but the vast majority were still denied a vote. Agitation coalesced in 1838 around a People’s Charter. This demanded six reforms to parliamentary elections.

A great rally was planned at the Yew Tree Inn, Roberttown. On Whit Monday 1839, a quarter of a million people streamed onto Peep Green Common, Hartshead. They came from across the West Riding, including 20,000 who walked from Todmorden led by a brass band. The Chartist leaders Feargus O’Connor and Bronterre O’Brien whipped up passions in support of the Charter. Fearful of revolution, the government sent spies to mingle with the crowd. There was at least one other huge rally at Peep Green.

A national petition attracted over 3 million signatures. But the government was unmoved. A wave of strikes followed.

Chartism faded as a political movement when economic conditions improved late in the 1840s. The campaigns did not directly lead to any legislative changes and it was into the 20th century before everyone including women had the vote.

The Plug Riots of August 1842 were a protest about working conditions, food prices and lack of reform. The first attack in Cleckheaton targeted Anderton’s factory at Providence Place. A mob attempted to draw the plug from the boiler,[to cut off the steam and shut down the mill], but they were beaten away. They met little resistance at Roundhill Mill, Gomersal. Five to six thousand men and women then assailed St. Peg Mill. Two of the three boiler plugs were drawn before special constables, a troop of lancers and a detachment of the Yorkshire Hussars arrived. Fighting broke out on a grand scale. The throng was dispersed without loss of life. 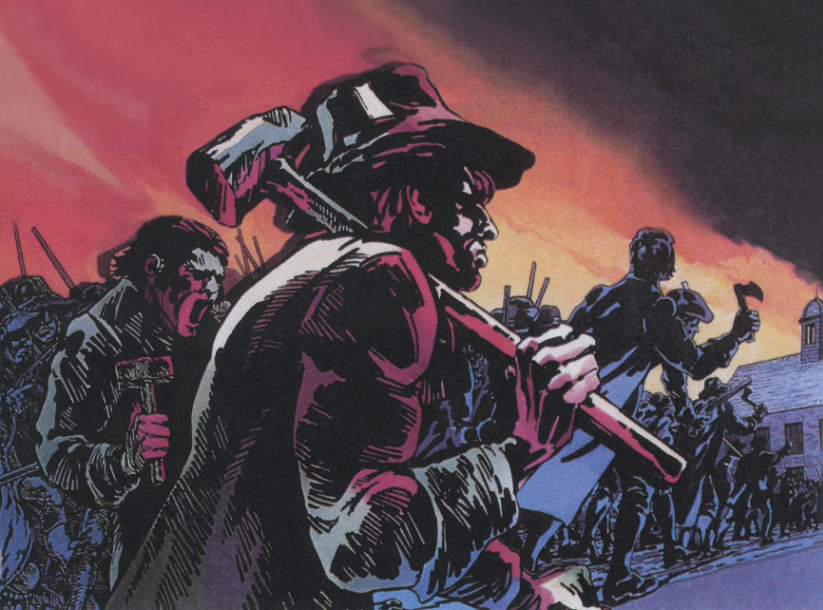